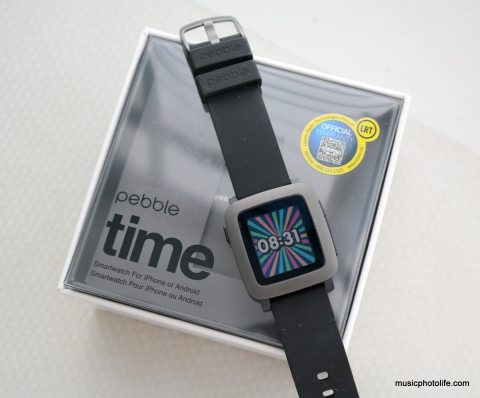 The Pebble Time is generally made of plastic other than the stainless steel bezel and scratch-resistant Gorilla screen. The strap is soft silicon and easily attracts dust, but with quick-release band mechanism, it is a snap to change the bands to other 22mmones without using any tools. The entire watch is very lightweight and feels next to nothing on your wrist. The size is relatively small compared to other smartwatches, so I feel totally at ease wearing it. The 64-colour e-paper display is always on and easy to view in daylight. If you needed illumination, just give it a shake and the backlight will appear. With 30m water resistance, you can practically wear it everywhere you go and in whatever you do. 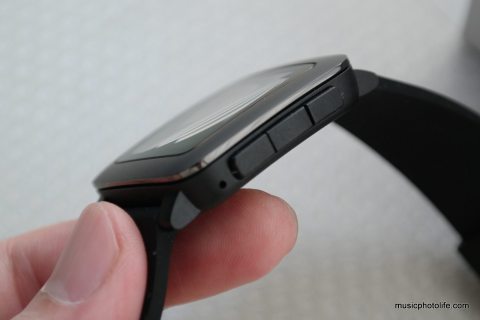 The Pebble Time does not support touch response. You navigate the Pebble Time with 4 buttons: back button at the left, up, select and down buttons at the right. I’m not sure about you, but I like products without touch screen because touch gestures can go wrong in so many ways, which will thwart the experience. Not forgetting, I would have to take great care not to touch the display unnecessarily.

Of course, there are challenges without touch screen when one has to use buttons to navigate. For one, the Pebble Time buttons are quite stiff, so it took quite a bit of finger muscles to click around (I guess all the years of on-screen tapping has reared its ugly head). Second, it takes more work to get to something on the Pebble Time.

As you move through the menu, access the apps or when notifications pop on-screen, you will see animated transitions which bring out the fun side of Pebble Time. The app menu items doubles as showing app statuses, so settings menu item shows battery, while alarm menu item shows the next alarm. 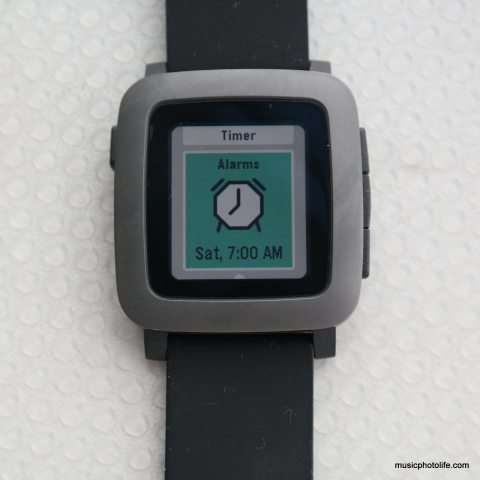 After a while, though, the animation novelty wears off, and I’d wish there is an option to disable it so that the screen shows me information faster.

At the heart of the Pebble Time lies the apps that you install to make it as useful as you would want the smartwatch to be. I read that previous generations of Pebble limits the number of apps you can install. For Pebble Time, there are no such restrictions. 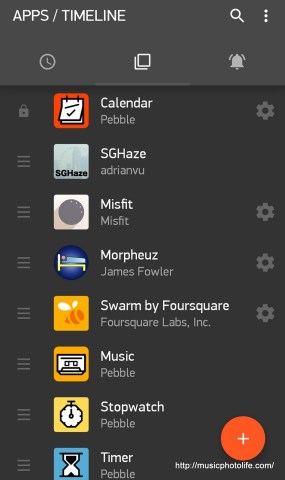 Out of the box, the Pebble Time already has some pre-installed apps: settings, timeline (calendar), music, stopwatch, timer, alarm, notifications, watchfaces. Via the smartphone app, you can re-arrange the apps. New apps and watchfaces can be searched and installed from the smartphone app.

During my review, I installed Misfit, SGHaze, Morpheuz, Swarm, 7-Minute+, Pixel Miner, Checklist. Depending on the apps, you can configure via the watch or via the smartphone. What I like about the apps is that you can leave the apps running on the screen and it will not auto-exit to the main watchface. So if I am listening to music, I can leave the music app on screen, and even after a long time, as long as I do not touch the watch, the app still remains on-screen and I could quickly change tracks. 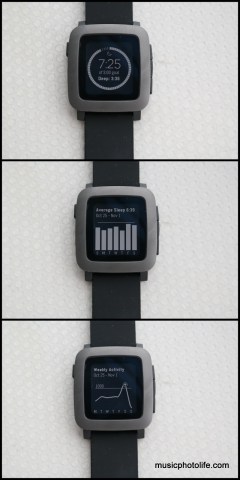 Many app makers utilise this UI behaviour effectively. For instance, SGHaze app screen is a clock with PSI which you can refresh on-demand. During days where I needed immediate PSI updates, I leave SGHaze running on the screen. Similarly, Misfit has a screen with time and steps counter, so I would leave that screen on. When Swarm is on-screen and when I go on a check-in rampage, I can refresh the location just by shaking my wrist and press the select button to check-in quickly. 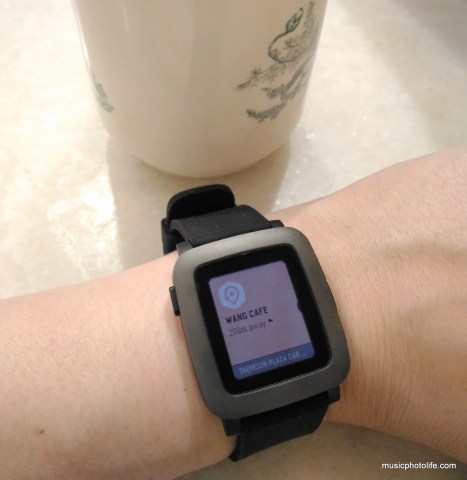 Interestingly, some apps only appear when you run it on your smartphone. This happens to Runtastic, so only when I start the app on the smartphone, did the app magically appear on Pebble Time. 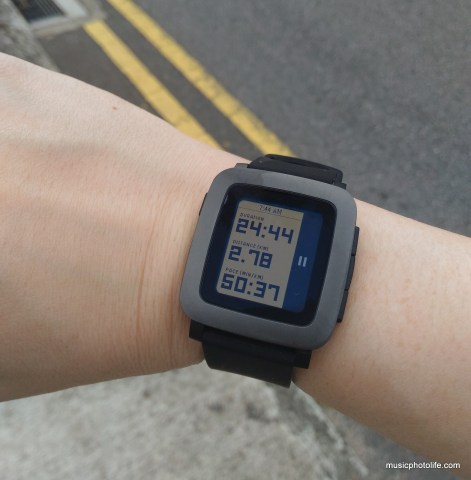 I won’t go into details about the good and bad about apps, since it is dependent on the app developers. As one of the largest smartwatch app stores, you will find an app that works for you on Pebble Time. I just felt some apps are not worth using on Pebble Time due to the small screen and more laborious to scroll. For instance, I wouldn’t think it makes sense to read social network app feeds on it. But if you think it is a great idea, there is an app for that. 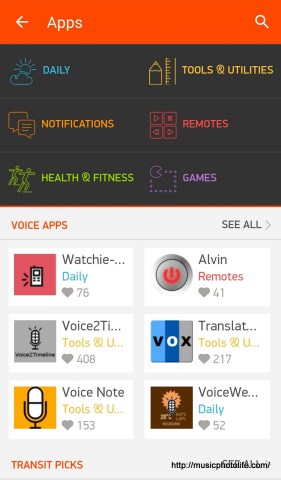 Because of the way Pebble Time leaves the apps on-screen without forcing a screen exit to the main watchface, I find the Pebble Time is very app-friendly. It does not pretend to always be a watch.

Pebble Time supports voice recognition, since it is practically impossible to type without touch screen. It did not work quite well for me, probably because of my untrained accent. You can respond by templates which you can configure via the smartphone app. I think that is useful enough for me.

The Pebble Time may seem to be a little less user friendly or intuitive due to the non-touch interface, but that has not stopped me from pwning it. In fact, I thought these personalising tips make Pebble Time work better than other smartwatch OSes. 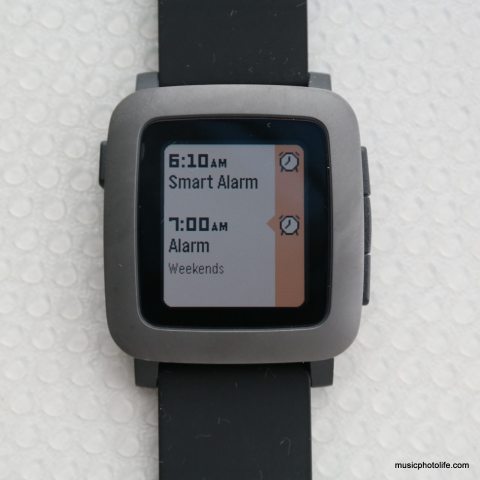 One of Pebble Time’s key features is the timeline, which is a list of what has happened and what will happen. It is not limited to calendar events, but also events from other compatible apps. For instance, you can see the timestamp you checked in to a location using Swarm, or the next alarm you preset. Pebble call these events “timeline pin”, and you can choose whether to show the respective app events on the timeline, which is easily accessible by pressing the up or down button from the main watchface screen. Press up to see past events, and down to see upcoming events.

You can configure Quick Launch apps that will start when you press and hold the up and down buttons. The buttons are configurable from the settings menu. For my case, I set notification app as the down button so that I can retrieve any notifications I may have missed. 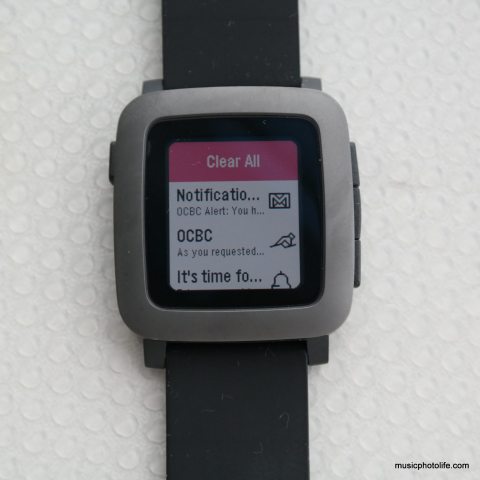 Speaking of notification, Pebble Time is very generous in storing your historical notifications, which I thought was rather useful at times when you wanted to browse through previous items that you may have dismissed on your phone. Most other smartwatches would not retain the notification list. The number of notification items stored seems to be dependent on the size of each message. I counted once and there were 100 items.

You can set a schedule to automatically activate quiet time, which disables all incoming notifications. However, there are times where you would want to activate quiet time manually. This is easily done by press-and-hold the back button.

There is another quick way to access your favourite apps: re-arrange to the top. This way, when you press the select button to access the menu, that app would be the first to appear. For apps that I have configured as Quick Launch, I could place them further down the list. 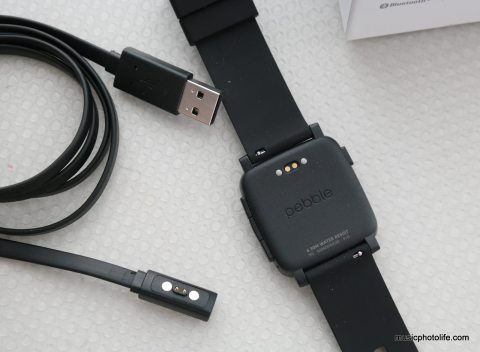 The watch is rated to last for up to 7 days. My review unit lasts me about 4, and perhaps if I don’t install so many apps and no activity tracker running, I probably could add another day or 2. Even if the watch battery hits 0%, the watch will go into ultra low-power mode and will still display the time for several hours.

Charging is achieved by attaching the magnetic port to the back of the watch. The battery remaining indicator appears in multiples of 10%, so it may not be accurate to gauge the actual remaining battery life. 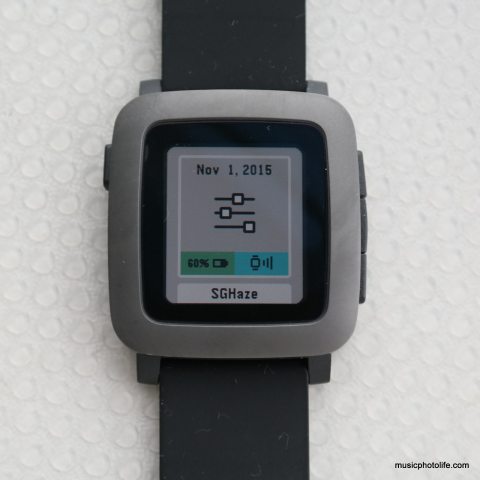 During swimming, I passed the watch to my daughter to play “underwater fetch”. After the brief game, I found several scratches on the Gorilla glass surface and steel bezel. The convex design probably made it easier to get abrasions. It serves as a very good lesson to all out there not to do what I did. I would definitely apply screen protection if I were to own one. 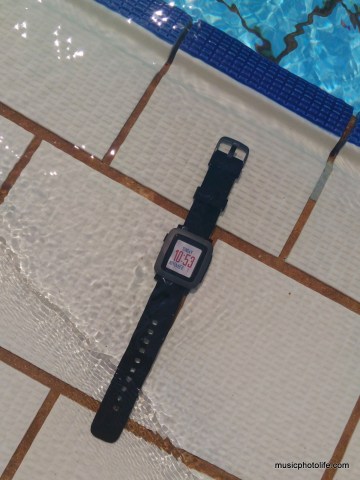 To sum things up, the Pebble Time is an absolute fun and intimate watch that I find myself using more often than other smartwatches. Pebble’s decision to retain the non-touch interactivity makes it a very unique wearable compared to Android Wear or Apple Watch. While most makers attempt to create polish-looking – albeit bulky – timepieces disguised as technological wonders with brilliant screens and heap loads of hardware, Pebble Time does not pretend to be a classy watch. It turns out to be the best unobtrusive wearable by replicating the familiar experience of good ol’ digital watches.

Pebble Time is distributed by LRT in Singapore with 1 year local warranty. It works with Android smartphones 4.0+ and Apple iPhones 4 iOS 8 and above. It retails at S$329 and available at Challenger, City Chain, Courts, Epicentre, Newstead, Sprint-Cass, and other retail outlets, in colours of red, black, or white.