musicphotolife
Hub Associate
Xpera Z Specs:
Sony has promoted the Xperia Z as "the best of Sony in a smartphone", and in general I believe it is so. The Xperia Z is certainly one of the better smartphones that offers a good list of features that benefits the end-users. The Quadrant benchmark hits an impressively high 7451 points.
Design First 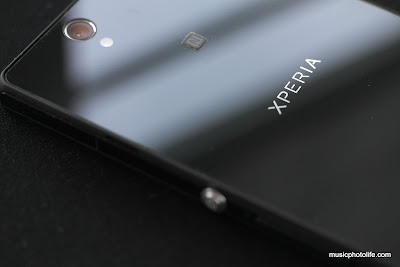 The Sony Xperia Z is obviously built to look good, not feel good. Its squarish design is in stark contrast with the numerous competitive models out there with smooth curves. Glass panels cover most of the phone while the corners and edges are fused with matt rubber material to add ruggedness and durability, which I feel would ensure the phone can withstand a few drops.

All the connector ports are well-concealed with caps that are blended into the design, you wouldn't even notice it. The covers are a necessity to provide the Xperia Z its much-needed water-proofing. This might prove to be inconvenient if you use the ports regularly, like plugging in your headphones or charging the phone. 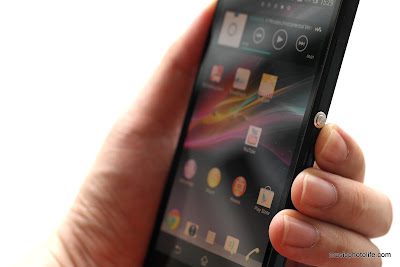 The most prominent feature of the Xperia Z must be the power button, placed almost midway along the sides of the phone. This placement provides greater accessibility to the button, and its physical prominence means I will be able to find the button just by feeling it. The volume rocker buttons, located just below the power button, is another well-thought design, for its length is long enough to prevent any mis-presses.

Features That I Like
Connectivity - With MHL, USB-OTG, micro SD card slot, and various other Sony-branded wireless sharing features, the Xperia Z has no problems sharing content by means of file transfer or display mirroring. Plug the phone via USB to your PC and you can access the internal memory for ease of data transfer.

Walkman-inside - Xperia Z is now more music-friendly. Its Walkman app offers some audio enhancement features which I feel works well and does not give a distorted audio experience like many other players. I can also control my player from the lockscreen and dropdown notification screen. The Xperia Z comes bundled with the earphones MH-EX300AP which delivers rather decent audio quality: flat response with slight treble bias, moderate mid-range, faithful bass. It is lightweight and does not exhibit cable rub noise when moving.

Sadly, I cannot say the same for the phone speakers, which produces uninspiring quality and lacks volume. Nevertheless, credit has to be given to Sony design team for placing the speakers at the side instead of the rear, so the phone remains audible even when placed on flat surfaces.

Mini Apps - Sony is not the first to support apps that run as a floating window, but Sony allows you to download these Mini Apps from the Google Play store and expand the app list. With Mini Apps, I can run apps like Calculator, Voice Recorder, Unit Converter, Notes, and even Camera, as a floating window. But only one Mini App can be run at one time.

Preinstalled Sony Apps - In general, the preinstalled apps in the Xperia Z is are functional and good-looking, and somewhat reminds me of Microsoft Windows 8 look. The Album app allows you to change the thumbnail size just by swiping left or right, and has a globe view of your images tagged with location data. The Sony Car app provides large icons for you to press when behind the wheels. The Socialife app brings all your social feeds into a single app. The TrackIDhelps you find the songs that are played over the air.


Full HD Screen
2013 is the year of full-HD screen. Sony Xperia Z is one of the first smartphones to do that and more will follow. Looking at the images, there is no doubt that with the higher pixels per inch (ppi), you will enjoy smoother images, sharper text. The fact is that it really doesn't make a lot of difference to casual users. 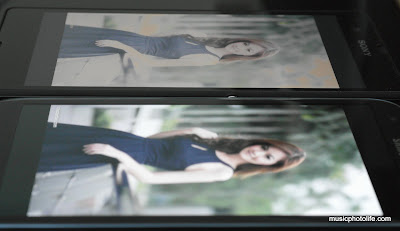 While Sony Xperia Z's full HD resolution offers remarkably smoother image quality, it suffers from contrast distortion when changing viewing angles. Also, its Mobile Bravia Engine 2 is not recommended if you do not like over-saturated images. Another annoying fact is that the glass screen is a dust and fingerprint magnet, plus with its gloss surface, perhaps you might want to invest in a screen protector.

Camera: 13 Megapixels
Another norm for smartphones of 2013 is higher camera pixel count. Upon close comparative scrutiny with the Samsung Galaxy S3, I find that the Sony Xperia Z loses slightly in the area of shadow details and sharpness. Under harsh lighting, the camera exhibits colour aberration (i.e. purple fringing). But as long as you do not scrutinise the images under high amplification, the images are highly usable with rather accurate colour capture.

The app is also thwarted with slow startup that made me miss some important shooting moments, and shutter lag caused by re-focusing during every shot.

But I like the ability to shoot either still image or video from the same screen, without having to change modes. The camera also displays previously shot images in small thumbnails which you can either collapse or long-press to manage the images.


It's a Sony
Sony Xperia Z is an engineering feat. You will never imagine it to be water resistant of up to 1 metre, and yet still look so gorgeous. You could never tell its display is a full HD 1920x1080 resolution, with every image appearing sharp and natural. Its skinned UI is sleek and beautifully animated and designed. There are plenty of Sony-proprietary features to improve user experience, like integration with PlayStation, content mirroring, downloadable Small Apps that runs as floating windows. Indeed, the Xperia Z has the Sony DNA imprinted in every inch of the device, and I think that is a very good thing. There are areas that make me like the Xperia Z less, but on the whole it is a beautiful smartphone to use. Based on market sentiments, Sony has delivered a desirable Android smartphone that will find its way into the hands - and the hearts - of the masses.

Battery (lasts less than one day)

User interface is buttery smooth just like stock google nexus (4.2.2) which i previously own. The only disappointment is the camera app which took a few seconds to launch. Other than this, it overperforms nexus with 4.2.2.

Love the internet browser too. Buttery smooth and with 4G, its super fast. Very pleased with this.

I like the build and the design. Hardware wise, there isn't any much better it can get. The new Sony flagship phone puts sony back into the smartphone race.

Cheaper as compared to HTC One and S4

Bettery life could be better.

Screen is not as good as the one that HTC One and S4 offers.

i'm not a heavy user but still i wish the battery life could be better and also it gets hot after a while when accessing internet.

The best Sony mobile to date, and I mean comparing to what I owned, Xperia X10, Xperia Arc and Xperia S!! I love it so much that I managed to convince 3 of my friends to change their current mobile to Z. Below are some of my reviews:

- lightweight, sleek and cool design (I have the white)

- waterproof (I always show off by washing it ... LoL)

- paired with the headset, looks extremely hi tech with NFC

- pictures taken with the camera is way too heavily processed, Xperia S is still better

- tends to get too hot and I hate it!

- I think it's pre-laminated with a screen protector which tends to scratch quite visibly (I did not buy any cover, casing or screen protector since marketed with dust proof and drop proof)

Everything is **bleep** good in this phone except the sound is very low in both mobile speaker and also in headphones. Headphones are very good with other devices but only with Z it is very very poor in volume.