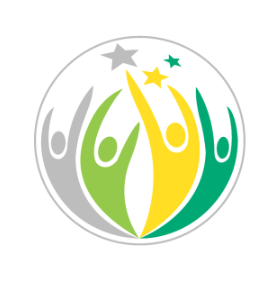 When it comes to Internet connection today, Bandwidth and Speed are being used interchangeably although they mean different things. Speed is generally used by consumers to refer to how fast they can download files and upload files. Broadband Internet packages are sold based on their bandwidth, or the size of the "Internet pipe" that is allocated to each user. This number refers to the capacity of the "last mile" connection that connects your home to the nearest aggregation point. In other words, it is the maximum throughput that the user can get on his broadband service.

Does higher bandwidth give you faster speed?

Imagine that you're driving on a road with 4 lanes in a car that can go at a maximum of 300km/hr. No matter the amount of lanes on the road, your car can only go at a maximum of 300km/hr and no faster. However, this same road with four lanes comes in handy when your family members having their own cars share the same road and reach the same destination at a shorter time as opposed to having a single lane road where they will have to queue up. Likewise for our broadband service, with a higher bandwidth you can actually do more at the same time or share the connection with your family members using a bigger pipe. 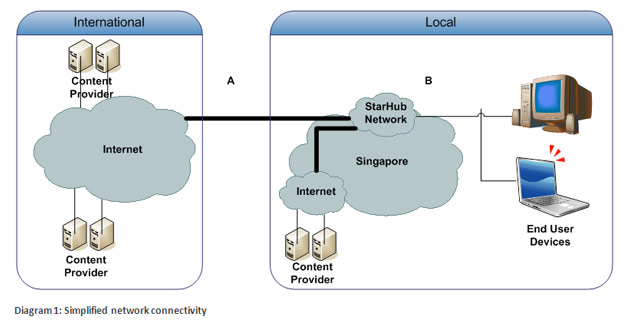 International bandwidth refers to the max bandwidth that is allocated to each subscriber connecting from StarHub’s network to the Internet outside of Singapore at point A in Diagram 1.

However, when it comes to International bandwidth, the equation gets more complex as distance affects the performance of the international connection. In reality, the distance from Singapore to Hong Kong, China, United States of America and Europe varies and for bigger countries like China, United States of America and Europe, the distance between states and provinces also varies. Thus, the throughput to different international location varies accordingly. This is why when subscribers performs speedtests to different countries, they usually get different results.

Read more under the “How it works?” tab.

Upload bandwidth refers to the max bandwidth allocated from end user devices to the Internet.

In the consumer world, the technology deployed take into consideration of user’s needs, cost and technology constraint. End users usually download content from the Internet more than upload content. Thus, RSP employs asymmetrical bandwidth where download is usually higher then upload. Having said this, this download and upload bandwidth will also be used in the context of local and International bandwidth.

The single most common cause of poor performance is a computer that is in poor shape for broadband. The usual problems are:

The Internet is a resilient network built originally to withstand a nuclear war. One reason for this strength is TCP, the network protocol that makes sure your data gets from one point of the Net to another.

TCP is designed around the assumption that some parts of an email message, for example may not get through the Net.

For the sake of an example, let’s imagine you are downloading data from www.microsoft.com, and one of those many packets streaming down to you disappears en-route.

Maybe a random outage or failure knocks a network router for a microsecond, and the packet is dropped. At your end, your computer notices the missing packet in the stream of sequence numbers, and so does not acknowledge its reception.

The sender notices the lack of acknowledgement, and must re-transmit the lost data. The retransmission procedure adds to the amount of data flowing over the connection, slowing the entire transfer down.

There are many ways that TCP copes with networks that are down. But in the end, consistent packet loss along a long Internet link means Internet traffic is often slower than it should be, even though it may be one packet in ten or twenty that is being dropped.

If there is continuous packet loss between you, and your favourite site, then web pages or file transfers, which follow the TCP protocol, are going to slow down to a crawl.

If you see extremely slow performance from a particular website, then you can do a ping test, which shows how many packets are lost along the way.

To do a trace route, the instructions are as follow:-

Factor 3: Many servers cannot currently offer high speeds to you

Though StarHub strives to offer the fastest connectivity to the rest of the world, sometimes the weakest, or slowest, link is the one that your website uses to connect to the Net.

Here are some results of a speed test to several reasonably well connected websites, at 3am in the morning (off peak):

In this example, Microsoft and myisp.com would not provide the "broadband experience" to any user who thought they had speeds of 768kbps or more.

Many servers offer speeds far slower than even this, because they are busy, and you are sharing their bandwidth with dozens of other people.

For Singapore’s broadband users, 3am Singapore time is peak hour for Internet traffic in the United States. This may mean slowdowns to people surfing to US websites, because they have to compete for bandwidth with the rest of the American users.

When we transmit information from source to destination, the document will be broken into smaller packets to go through the Internet. The reason why every document that you send over the Internet ends up in the right place is because it is tagged with the destination information, just like your luggage at the airport. However, this “tag” – known as header in computer terminology, also takes up bandwidth as you send your data across the Internet. The IP header takes up about 13% of the packet while the rest are the actual data. So every time you send a document, you have to remember that there is an additional 13% of tagging information that is being sent.

Besides that, TCP tuning can also be used to improve the throughput. This includes adjustable parameters like TCP window size to maximise the throughput of a single TCP connection. TCP timestamp and TCP selective acknowledgement options have to be used with the right combination to increase the throughput performance. We shall not discuss this in details and we do not recommend you to adjust your TCP options unless you are very clear about what you are doing.